I've been introducing a cone 6 electric fire glaze into the wood kiln for the past several firings with some interesting results. This last firing produced some nice purple and yellow. I know the purple is from a reduction atmosphere in the kiln, starving the kiln of oxygen so that carbon is produced. That's probably a simplistic explanation of reduction. But I'm not a chemist.

The yellow was a suprise. I hadn't seen it before. Levi glazed quite a few of some small cups and vases with the cone 6 glaze for this firing, and we had it throughout the kiln, from the front to the back. We reached cone 14 in the very front of the kiln, and cone 10 in the back. Many of the pieces were brushed with red iron oxide underneath the glaze. I'm thinking the red iron helped produce the yellow.

The glaze is a copper carbonate glaze with a small percentage of lithium as an ingredient. It's a recipe from Richard Zakin's book on electric kiln glazes.

When firing atmospheric kilns, it's recommended to keep a log of each firing. Well, I did a poor job of logging on this firing. However, there was a point when I put the kiln into reduction by opening up passives in the chimney, which I do for most of the firings. What we did do for a period of time, was allow the build up of embers in the firebox without pulling a brick in the air intakes to allow more air into the firebox. I'm thinking this caused some heavier reduction than usual.

Here's a couple of examples: 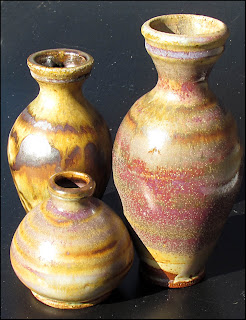 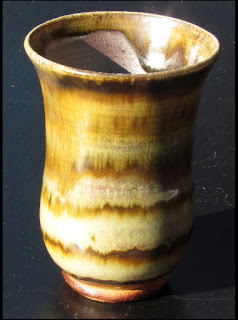 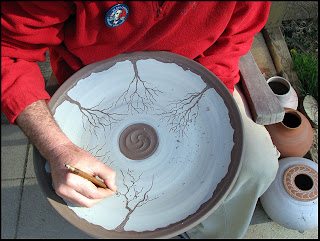 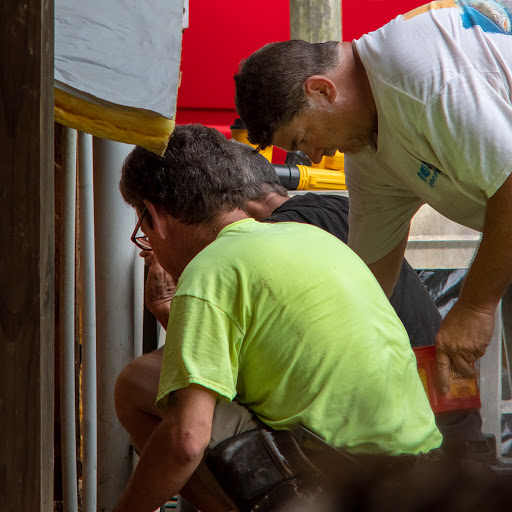 Michael Mahan
Seagrove, North Carolina, United States
Originally from Miami, FL, I developed an interest in pottery after writing a couple of stories on potters for The Enquirer Journal in Monroe, NC. I settled in the area in the 1980s, covering Seagrove for the Courier-Tribune in Asheboro. I stepped behind the potter's wheel full time in 1986, when I opened up WILD ROSE POTTERY in Whynot, just south of Seagrove. I now own and operate FROM THE GROUND UP, just south of Seagrove. I also play Irish flute.

I Am A Member

of the Seagrove Area Potters Association and the N.C. Pottery Center.